This remarkably fine document, part of the Dahlquist Collection held in Hawaii, is a copy of the passport issued to Thomas Atkinson by the representative of the Hanseatic Republics of northern Europe. It allowed Atkinson to travel to Hamburg in particular, where he had decided to take part in a competition to design a replacement for St Nikolai Kirche, one of the city’s most important churches, which had been destroyed by a disastrous fire at the beginning of May that year.

By the Agent and Consul General for the Free Hanseatic Republics of Lubeck, Bremen and Hamburgh, resident in Great Britain.

These are to request and require all those whom it may concern to allow Mr Thomas Witlam Atkinson, National of Great Britain, Gentleman, going to Hamburgh, to pass freely without let or hindrance and to afford him all aid and assistance.

The fact that Atkinson received this passport on 4th July 1842 shows that he was well aware of the possibilities that existed in a city that had been devastated by a massive fire that raged for three days, killing over 50 people, destroying 1700 buildings and leaving around 20,000 people homeless.

I have not been able to establish just how long Atkinson stayed in Hamburg. He did not win the architectural competition, which was eventually awarded to another Englishman, George Gilbert Scott. But the likelihood is that there was plenty of work in the city for a jobbing architect. We know that his son from his first marriage, John, died there in April 1846, so it is possible he was a resident in the city for almost four years, After his son’s death, most likely from tuberculosis, Thomas made his way first to Berlin and then to St Petersburg, where, having decided to give up his profession of architect, he began his travels.

The new church was once the tallest building in the world. It was mostly destroyed by Allied bombing during the Second World War, but the spire still stands and is a well-known landmark. Building started in 1846 and the church was finally consecrated in September 1863.

I have been asked by Baltabay, a reader in Kazakhstan, if I know the location of the six large stones drawn by Thomas Atkinson and published in his book Travels in the Region of the Upper and Lower Amoor.

This is the picture to which Baltabay is referring and it can be found in Chapter 6, which is called ‘The Kora and Traditions’. Many people have been fascinated by this picture as it shows six huge stones precariously perched in the bottom of a steep-sided valley alongside a river. Some have even speculated that they were placed there by aliens or beings with superhuman powers, as they appear to be enormous and unnatural.

Like Baltabay I was fascinated by this picture and very keen to track down the location of the stones. It appears that no-one had previously worked out the precise position. The valley that Atkinson describes is that of the Kora River, which starts at a glacier in the Djungar Alatau Mountains of eastern Kazakhstan and eventually flows into Lake Balkhash. It lies about 10kms to the south of Kapal, the small settlement where Thomas and Lucy stayed from October 1848 until May 1849 and where Lucy gave birth to their son, Alatau.

The valley itself is not easy to get into. Its western end, which terminates at the town of Tekeli, is almost impenetrable due to the very steep sides. However, there is a Buddhist stupa located at the valley entrance, suggesting that it was known about in ancient times.

Three years ago, with the help of local guides, I was able to reach the only track that can be used by vehicles to access this remarkable valley. Still today, Atkinson’s description of the valley holds true: “From this point the valley was exceedingly rugged, the granite cliffs on the north being nearly perpendicular and rising nearly 1,000 feet. On the south side, a dense forest commences on the bank of the river, extending up a very steep sloe for about 500 yards, to the base of some huge rocky masses. These rose in three terraces till they reached the snow line; in parts they were wooded, in others the cliffs have fallen, forming a mass of debris that extends from the edge of the forest to the lofty crags that stand bristling out of the snow like watch-towers and battlements.”

Atkinson describes the five of the huge stones that he later sketched: “As I approached this spot, I was almost induced to believe that the works of the Giants were before me, for five enormous stones were standing isolated and on end, the first sight of which gave me the idea that their disposition was not accidental, and that a mastermind had superintended the erection – the group being in perfect keeping with the scene around. One of these blocks would have made a tower large enough for a church, its height being 76 feet above the ground and it measured 24 feet on one side and 19 feet on the other. It stood 73 paces from the base of the cliffs, and was about 8 feet out of the perpendicular, inclining towards the river. The remaining blocks varied from 45 to 50 feet in height, one being 15 feet square and the rest somewhat less. Two of these stood upright, the others were leaning in different directions, one of them so far that it had nearly lost its equilibrium.”

Atkinson goes on to give an account of local superstitions about the rocks, noting that they were the result of a feud between geniis who inhabited the area and who had been punished by Shaitan and buried beneath the huge rocks. Ever since, locals had been fearful of entering the valley. The world ‘kora’ itself means closed or entombed.

Being such large stones, I assumed that it would not be difficult to find them in the Kora Valley. However, I could find nothing that closely resembled the stones, despite walking almost 15 miles along the bottom of the valley. However, I did find what I think it likely to have been the location for the stones. I also heard an explanation for their absence.

A local climbing guide, now retired, told me that the Kora Valley had been transformed on several occasions by earthquakes. On at least one occasion the valley had been blocked by falling rocks, forming a lake which had later burst and swept downstream large amounts of debris. He thought this could have happened to the stones. This made sense, as close to the spot described by Atkinson there are indeed a number of very large stones standing on their own at the bottom of a cliff. They are not so tall as those Atkinson described, but if the original stones had been knocked over and shattered, the existing stones could easily be the remnants of those he mentioned. Here are my photographs of the existing stones. 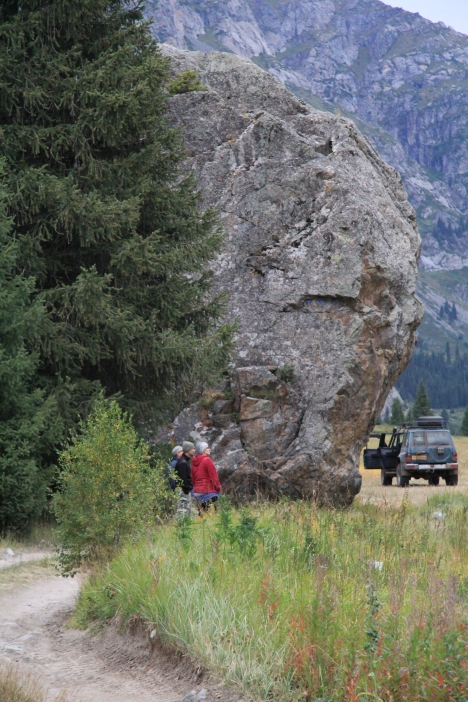 Of course, if you choose not to believe such a rational explanation, they you can join the ranks of sceptics that can be found online speculating about the superhumans who were able to move these massive rocks. Or perhaps you can choose to believe the Kazakhs, for whom this place still holds a sense of mystery.

Thomas Atkinson’s connections with the Russian Tsars are well known. His first book, Oriental and Western Siberia (1858), was dedicated to Tsar Alexander II, Emperor of Russia, whose father, Tsar Nicholas I, had given the traveller an enormously important document – a passport that allowed him to wander across Russia and Siberia, to leave and re-enter the country and to call upon local officials for help and provisions. Later, both Tsars had offered the Atkinsons their personal protection in St Petersburg even as Russia and Great Britain were at war in the Crimea between 1853-55.

However, Atkinson’s connection to Queen Victoria is less well known, even though his second book, Travels in the Regions of the Upper and Lower Amoor (1860), was dedicated “by special permission” to Queen Victoria. What is more, letters and books in the Royal Collection at Windsor provide some background to the relationship between Atkinson and his monarch.

The first time we hear about this is in Queen Victoria’s personal diary, where she records a meeting she held with Atkinson in October 1856, only weeks after he had returned from Russia for the first time to deliver his book manuscript to his publishers. Victoria writes:

“A frost, & found it cold, when we walked out with the Children after breakfast. — Service at 11. — After luncheon we saw about 50 very interesting drawings & paintings done by a Mr Atkinson, who has for about 6 years been travelling in Siberia, & Mongolia, which must be most curious. He has seen all the Russian possessions there & all their unknown Forts. He was very kindly treated by the Empr Nicholas, even after the war broke out, being allowed to remain at St. Petersburg, whilst it was going on. He saw the Emperor about 5 or 6 days before he died. — Walked & drove home. — Dining alone.”

However, that was not the end. It seems quite likely that there was a second meeting, although I cannot find a record. However, details are contained in a letter dated 21 December 1857 from Atkinson to a senior member of the Royal Household, Colonel Sir Charles Beaumont Phipps.

This letter makes it clear that the Queen had agreed to allow Atkinson to present a copy of his first book in person at Windsor Castle. She writes an instruction (in red ink) to Phipps on the back of a letter: “It may be presented in person – some day after luncheon next week at Windsor.”

Phipps must then have written to Thomas, who replied to query the arrangements: “When Her Majesty’s pleasure has been expressed will you do me the favour to inform me on which day during the week the audience will be granted? You have mentioned three o’clock as the hour but the day is not named,” Thomas writes.

Even if we do not know whether or not the meeting ever took place, we do know that Atkinson presented a special copy of his book, bound in red leather with gilt tooling, to the Queen, as it remains in the Royal Collection at Windsor. 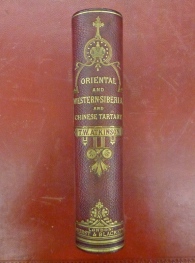