In October last year I wrote about the early American editions of Thomas Atkinson’s books on his travels in Central Asia and Siberia. I mentioned that both Harper and Brothers and also J W Bradley of Philadelphia had published several editions of Atkinson’s two books. I also mentioned the edition of Oriental and Western Siberia published by another Philadelphia company called John E Potter & Co.

Now I have come across yet another version of Oriental and Western Siberia published by Potter & Co. This appears to be a de luxe version of the book, with a fancier spine and cover. 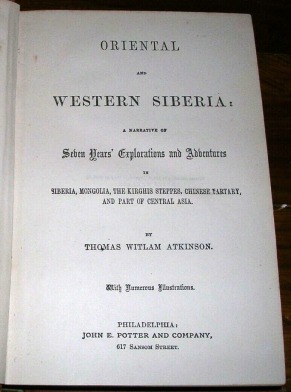 The date is not mentioned inside the book, but it is thought to have been published in 1870. Could there be any more editions lurking out there?