Wherever he travelled in Central Asia and Siberia, Thomas Atkinson always took an interest in archaeological remains. He was not a historian, but would often try to find out about the various impressive ruins and strange earthworks he came across on his travels. For example, in Oriental and Western Siberia he describes a copper knife he had been given by Cossacks, who had found it near the Bouchtarma River in what is now northern Kazakhstan. They cut it in half, he says, believing it to be gold.

On 30th November 1859 Thomas also delivered a paper at the Geological Society in London “On some bronze relics found in an auriferous sand in Siberia”, at which he exhibited the said fragments. He told his audience that the decorated bronze pieces, which appeared to be either from a horse harness or a bracelet, were found in August 1851 on the River Shargan in southern Siberia (lat. 59֯ 30’ N and long. 96֯ 10’ E) and that he was given them only hours later by the director of the goldmine in which they were found. The miners were excavating a bank of gravel and sand and the objects were found at a depth of around 14 feet. “As I have no theory to establish, I give them without any speculations as to the period when these relics were deposited in the sandy gold-bearing bed”, he remarked.

Oriental and Western Siberia also gives a brief description of Thomas’ visit in 1847 to Ablaikit, near Oskemen, (Ust-Kamenogorsk) in north-eastern Kazakhstan. This is the site of a ruined Buddhist monastery compound that dates back to the seventeenth century and which had also been visited and drawn (see below) by Peter Simon Pallas, the German-born scientist who spent the years 1768-74 travelling in Siberia and Central Asia. The site is of great interest to modern-day archaeologists and this summer a major investigation into the site was begun.

Thomas, who was seemingly unaware of Pallas’ writings, writes: “We now turned to the south, riding along about a verst from the foot of the high rocks and had not gone far when we came upon a large enclosure surrounded by a thick wall build of very large blocks, with smaller stones fitted in between them. This wall encloses a space of almost a verst in length and half a verst in width, extending up to the foot of some perpendicular rocks. It has been a work of great labour and must have been built by a different race from the present, who look upon it with wonder. In some parts it is six feet high, in others a little less and seven feet thick. None of the blocks have been cut.” Clearly as a former mason, he was particularly interested in the stone work.

He spent some time at the ruins, entering the enclosure, much to the surprise of his Kazakh guides, who declined to follow due to their superstitious beliefs.

Further south, during his journey to Kapal with Lucy in the summer of 1848, as he approached the Djungar Alatau mountains, Thomas came across further examples of earthworks and buildings from prehistory. He remarks in his second book, Travels in the Regions of the Upper and Lower Amoor, on the profusion of kurgans (tumuli) they saw, describing some places where there were literally hundreds of mounds, of all shapes and sizes, dotted across the landscape.

One particular description has always interested me, but until now I have not been able to identify its location. He writes: “The ancient inhabitants of this region rendered it extremely productive. The numerous canals which still exist show their engineering skill and the extent of the irrigation it produced. In some of the channels the water yet runs and where it overflows, the sterile soil is covered with a luxuriant carpet of vegetation, adorned with flowers of singular beauty…The vast number of tumuli scattered over the plain, the extensive earthworks which have been either cities or strongholds, afford convincing evidence that a great people were once located here.”

He describes one such ancient group of buildings in the valley of the Lepsy River, describing it as “a parallelogram about 700 yards in length and 300 in breadth. The earth walls are now about 12 feet high and have been considerably higher. Their thickness is about 16 feet at the bottom and nine feet at the top. This enclosure was entered by four gates, one being in the centre of each side; but the eastern end has been partly destroyed by the river, which is gradually cutting down the bank.

“Half a mile to the north and south are numerous mounds and at about a mile from the western end there is a large tumulus, about 150 feet in diameter and 50 feet high. The people who produced them were a very different race to the present occupiers of the country and had made an extraordinary advance in agriculture and mining.”

Last year, as I travelled south-west from Lake Alakool towards Lepsinsk, Sarcand and Kapal, I had tried to locate this place, but could find no-one who knew anything about it. However, this week, after a determined online search I think I have found the exact spot, which is in the modern-day village of Koilyk (previously called Kayalyk or, more recently,  Antonovka), not far from Sarcand. Read this recent description: “Kayalyk territory was surrounded by a fortified wall, having the form of an irregular quadrilateral with sides of 750 to 1,200 meters. Nowadays, it has been preserved well in the eastern part of the unoccupied area of modern buildings and the height reaches 4 m. Elsewhere it can be observed only fragmentary. Certain significant buildings, such as the Buddhist temple, are located at a distance of a few hundred meters from the city walls. This means that agricultural land, farms, centers of spiritual missions were at a considerable distance from the city, enclosed by the city wall, built from mud brick.” You can read more about this site here.

From this description I have no doubt that it is the same place described by Thomas as an irregular parallelogram. Recent archaeological investigation has revealed that the site is archaeologically extremely rich, with the remains of a large mosque dating back to the early Islamic period, as well as Buddhist and Manichaean temples. This was once an important town on the Silk Road, close to the ‘Djungarian Gates’ that lead through the mountains eastwards into what is now Xinjiang in Western China. 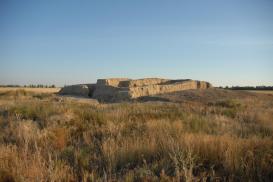 I am now working on an Atkinson Trail for the Zhetysu region of Eastern Kazakhstan and Koilyk will certainly be one of the highlights.

One thought on “Ancient remains on the Steppes”