I have unearthed another fantastic cache of Thomas Atkinson letters and drawings from the Manchester archives that throw further light on the buildings he designed and constructed. Dating from 1832-38 they were mostly addressed to the Royal Manchester Institution and concern paintings and architectural drawings he was submitting for exhibition at the Institution. I have written previously about some of these designs, but now we have a much fuller picture. 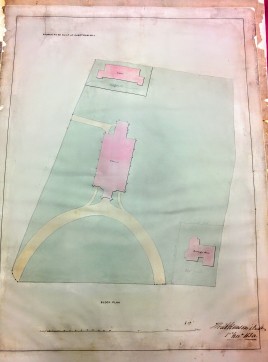 A letter from Atkinson dated 2 August 1832 lists 10 drawings for inclusion in one of the Institution’s regular exhibitions. The drawings are absent, but the names themselves are revealing. Some, like Hough Hill Priory in Stalybridge and St Nicholas’ Church, Tooting, we know already. But others are new. These include a house designed for John Ashton of Newton, Cheshire, a chapel in Wales, Portland House in Ashton under Lyne, which was built for the local industrialist and mill owner Samuel Swire and Barnby Hall, near Cawthorne, which was built for John Spencer Stanhope of Cannon Hall, the estate on which Thomas had been brought up.

The following August Thomas writes to inform Mr Winstanley, secretary of the Royal Institution, that he is submitting two cases of drawings for approval for their summer exhibition. These include the headquarters of the Manchester and Liverpool District Bank in Spring Gardens, Manchester and the Bank’s office in Hanley, Staffordshire (see my posting of 10 November 2016), both of which I have previously mentioned. Also included are proposals for a new grammar school in Birmingham, a school in Wakefield, Yorkshire and a rectory for the Reverend F R Raines at Milnrow near Rochdale. The two schools were not built, but the rectory, for the well-known antiquarian Dr Raines, was completed and still stands, although somewhat modified.

The list of paintings – none of which are in the Manchester archives – also includes designs for a gateway and cottages for Messrs Cheetham’s cotton mill in Stalybridge, a house in Hither Green in Kent, lodges for Charles Hindley in Dukinfield, Atkinson’s design for the tomb of Walter Spencer Stanhope in Cawthorne Church, a lodge for Hough Hill Priory and a design for Kirkstall Church near Leeds.

In a separate (undated) letter, Atkinson also lists several paintings, including a view of Llanberis Lake and Dolbadarn Castle in North Wales, a view of Sudely Castle in Gloucestershire and a view near Ffestiniog, also in North Wales.

Already I have been able to track down pictures of some of these buildings, although several of them no longer exist. The list of Thomas’ architectural projects continues to grow and I feel sure we are not yet at the end of it. More will appear here on the buildings as it emerges from the vaults of obscurity. And who knows? Maybe one day some of the landscape paintings will turn up!