For some time I have been puzzling over the location of the little temple portrayed in the picture above by Thomas Atkinson. It clearly states that it is a painting of a Buriat temple, so the likelihood is that it was painted during the Atkinsons’ journey in the summer of 1851. Now I think I have been able to ascertain the exact location.

The bishop in question was Bishop Nil Isakovich, bishop of the Irkutsk and Nerchinsk eparchy from 1838 to 1853, who spent many years attempting to convert Buriats to Orthodoxy.  As a Christian missionary, he tried to find out the reasons why lamaism spread so easily amongst the Buriats. He even completed a major work on Tibetan Buddhism – Buddizm, razsmatrivaemyi v otnoshenii k posledovateliam ego, obitaiushchim v Sibiri (Buddhism, examined in relation to its Siberian followers) – which was published in St. Petersburg in 1858. It was a thorough description of Buddhist doctrine, rites, and organizational structures in the Transbaikal. The bishop observed the rapid spread of Buddhism in this area and tried to work out the best ways in which they could be persuaded to convert to Christianity. He was the inspiration for Nikolai Leskov’s character of the Bishop in his novel On the Edge of the World , who learns through example and suffering that in indigenous peoples of all cultures there is dignity that must be recognized and built upon as a foundation for Christian conversion.

I am grateful to my good friend Vladimir Chernikov for pointing out that the Bishop’s house was located in a place now called Nilova Pustyn (named after him), north of Turan, on the road that runs from Lake Baikal to Mondy, on the Mongolian border. Close to the Bishop’s house are mineral springs that have been in use for many years. Some of the Decembrists exiled to Irkutsk used to come here to ‘take the waters’, including the Bestuzhev brothers, Trubetskoi, Rayevsky, and Prince Volkonsky – all of whom were known to the Atkinsons and perhaps recommended this place to them.

The River Ike-Uhgun (Ikeougoune, as Atkinson wrote it) passes through Nilova and we know from Thomas Atkinson’s diary that he reached the bishop’s house on 24th July 1851. Leaving Lucy and Alatau to bathe in the springs, he set off on horseback up the river valley. Vladimir Chernikov points out that some miles upstream from Nilova is an important Buriat holy site called Burhan Baabai, where there are a number of Buddhist temples located in woods above a bend in the river. Here are some photos from Google Earth: 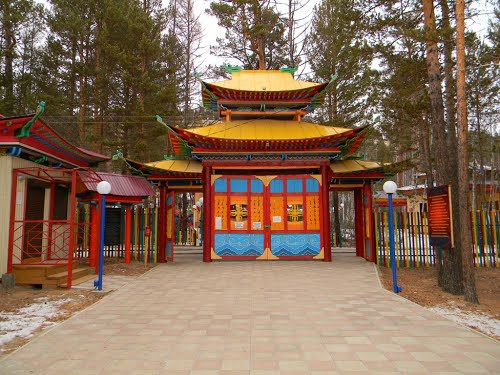 And here is the view towards the river:

Incidentally, this painting was bought from Atkinson in a sale at Christies in 1858 by the Duke of Cleveland. In October 1994 it was sold as part of the contents of Raby Castle in Co. Durham, along with 11 other pictures by Thomas Atkinson. Sadly, the dealers who bought the pictures say they can no longer remember to whom they sold them. Seven of the paintings were of scenes Thomas recorded during this trip to Buryatia in the summer of 1851. Very sad that we have lost sight – for the moment at least – of this important collection of paintings.