While we are on the subject of plagiarism (see the posting below this one), I want to show that Thomas was far more sinned against than a sinner, particularly in relation to his drawings and paintings.

Having spent many hours searching for images of Thomas’ drawings, paintings, etchings and lithographs, I was struck when I began to come across ‘alternate’ versions of some of them. At first I had no idea what was happening. Sometimes they would show his name, sometimes another name altogether. Here, for example, is an etching of Thomas’ picture of an incident at Kopal, entitled ‘A dangerous ride’, where he was almost killed by a runaway sleigh and which appears in Travels in the Regions of the Upper and Lower Amoor:

And here is another version of the same picture, as appeared in a French publication called Le Tour du Monde, published in 1863. In this case the etching has been done by the well-known illustrator and artist Yan d’Argent, using the original as a model. Three articles, totalling almost 50 pages appeared in the publication, which was a precis of Thomas’ book. It is unlikely that any royalties would have been paid.

And here is yet a third version, as appeared in a German book, Reisen in den Steppen und Hochgebirgen Sibiriens, published by Anton Etzel in Leipzig in 1864. It was subsequently translated into Russian, complete with the pictures. 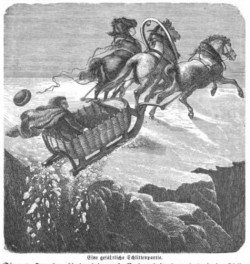 As you can clearly see, Thomas’ hat has levitated in the final etching. Here are a few more examples that show how Thomas’ pictures were pirated – there was no international copyright in the 1860s – by continental and American publishers. This one is called ‘The Maral’s Leap’:

The first is the English version, followed by the French and then the German versions. It is unlikely that any royalties were ever paid for these unlicensed copies of Thomas’ pictures. I have dozens of similar examples. A version of the picture above even appeared on the front cover of a novel published in Romania in 1935:

This book, A Nest of Invasions, by the well-known writer Mihail Sadoveanu (in fact, he was twice elected president of Romania), is regarded as a classic in modern-day Romania. Although it was published under a science-fiction imprint, is based on the travels of Thomas and Lucy Atkinson in Siberia and Central Asia and sought to highlight the beauty of nature and the integrity of traditional tribal life. It was a kind of early ecological novel.

In the 1860s in particular Thomas’ name reached across the world. In France his name was well recognised and his adventures were highly respected. The same was true in America, Germany and Russia. A Spanish version of his book Oriental and Western Siberia was also published at this time, although I have not yet been able to locate a copy (If you find one, please let me know). The more one looks into this the more the charge of plagiarism as levelled against Thomas looks like an excuse not to take him seriously.

One thought on “The pirating of Thomas Atkinson’s pictures”